Connect and share knowledge within a single location that is structured and easy to search.

Why was the hot dog question closed?

What are the consequences if my dog eats a hot dog? Was closed earlier today because it "was nothing more than a farce". 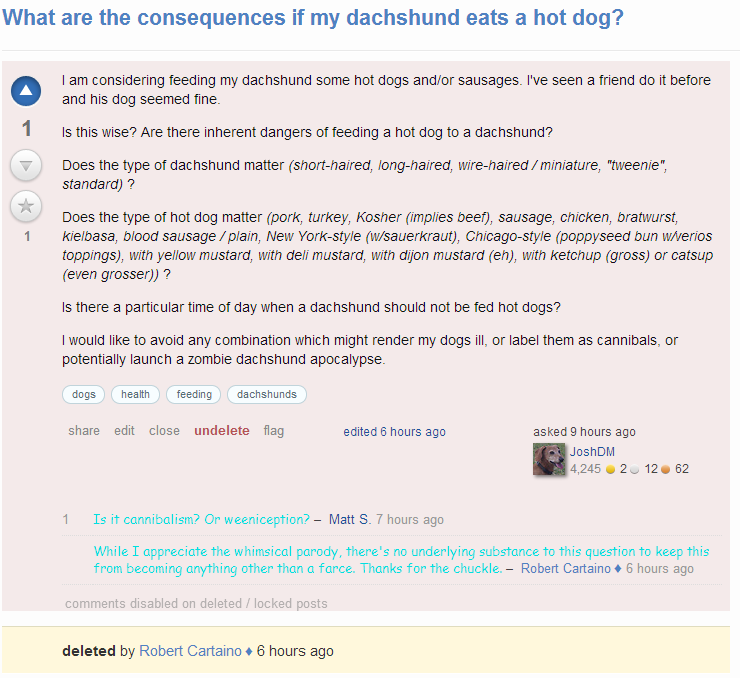 While the question was written in a humorous fashion (because it's April Fool's day which is also why my comments look so ugly), the core question is still answerable. Not only that, it's a good question that I was going to answer.

In short, hot dogs are commonly used as dog treats in training, but there are things you should watch out for when using hot dogs. The most common being sodium content.

It's not just me that's wondering this, as others in chat have asked why it was closed. Example:

Which brings up the other problem. There are other April Fool's posts, one of which isn't even answerable because it's about unicorns. 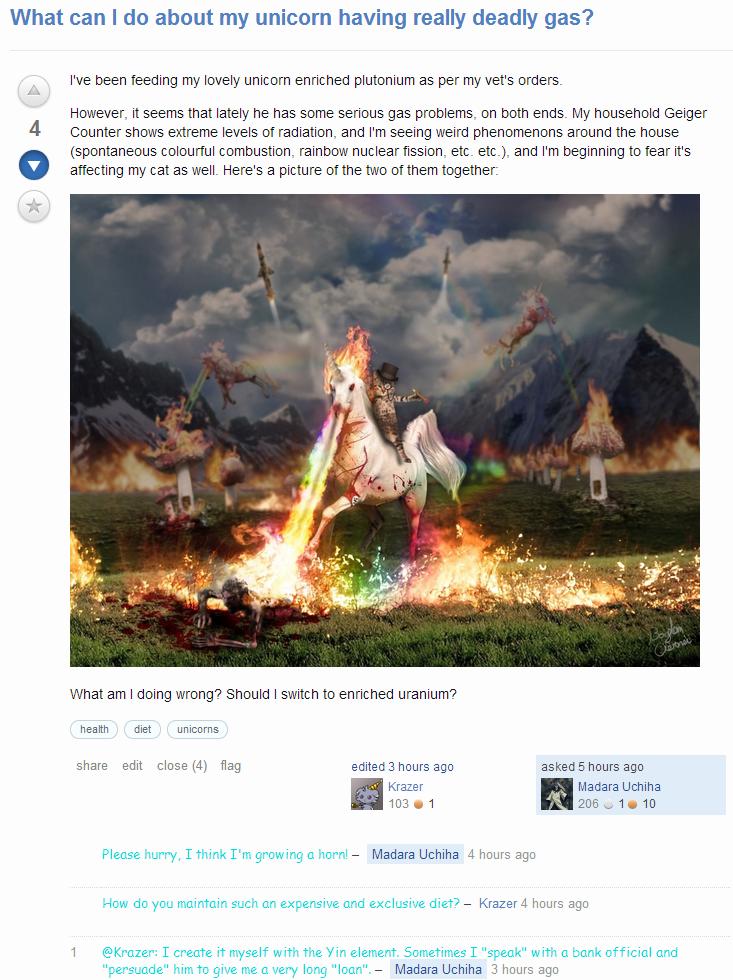 I think what makes this so bad, is that we can't even do anything about it, because mod deletions cannot be voted against. Not even if the post is edited after being closed.

I was trying to find out a reason why we can't vote to re-open Mod-Deleted questions, and all I could find were arguments on whether or not Mods had too much power. I'm not really interested in that as that's an issue with how the site was made (Though it keeps us as a community from improving the question). I just want to know why that question was closed instead of the obviously fake one, and why not let us decide if we want to close it or not. Note: There are close votes on the unicorn question, but there were none on the hot dog question.

It looks like a reasonable question about feeding hot dogs (etc) to dogs could be asked, but this doesn't seem to be it. (Any doubts should vanish by the time you get to the last paragraph.) If there weren't any answers, it might be better for the OP (or someone else, perhaps you) to ask a new question that's a little more on-point, since otherwise this would need to be edited and then the mods would need to be petitioned for reopening.

I agree that the unicorn question should also go away -- not because we don't like fun but because we're being inconsistent.

Because it was extremely clever mindless fun, otherwise known as an April 1 prank. I give kudos to the author for writing it, and I did get quite a chuckle out of it, but the novelty wore off when the calendar flipped a day over.

That's not the sort of question we want around when experts find the site; if a great vet that wanted to participate here found it in November, I don't think they'd realize it was a testament to the first day of the fourth month.

We generally clean up the confetti network-wide on April 2, which usually means deleting jokes - no matter how funny they were, and no matter how much we ourselves enjoyed reading them.

Not the answer you're looking for? Browse other questions tagged discussion voting close-reasons closed-questions .

2
This question is closed for the wrong reason, should we care?
3
Should “What is the best kind of pet to give as gift?” be converted to a community question then closed?
0
Is “Why does my pet do X?” on topic?
0
Could we have a close reason for “Not enough information”?
3
The [dog-obedience] tag isn't being used as intended
2
Worthwhile info in comment was deleted, why?
8
Changes to Hot Network Questions