Connect and share knowledge within a single location that is structured and easy to search.

Should we emphasize the need to go to a vet before a question asking for immediate help is posted?

We get questions from time to time, asking for solutions in regards to their pets acting either strangely or appearing as if they are not fine. A lot of them get the standard response, "go to vet now". We can't blame them for the lack of ability to identify when a specific symptom can lead their pet to an even worse situation, in the next few minutes.

This question and this one, the posters took a few minutes to write their questions down, when they could have used this time to take the pet to the vet. But once again, in many situations, posters won't know they have to go to vet until someone leaves a little comment, around ten or more minutes later, saying that they should.

So, could we have a feature on this SE site which would catch out keywords from the poster's question's text box and display a message telling them to go to vet just in case, because every second is precious when they're in doubt? It is similar to the filter which tells us to provide more written information, other than links, when the majority of the answer is just links.

This wouldn't work if the poster does not have a vet near enough to get the pet transported, however even if the pet's symptoms turn out to be mild and not dangerous to life, the poster would have still gone to vet just in case. I think any pet owner would rather be safe than sorry afterwards.

Edit: Please let me know if this needs clearer explanation, I will gladly go over my question again and word it more clearly and provide an example screenshot once I can get my hands on my home computer.

Often when you call the doctor's office, the answering machine starts with "if this is an emergency, dial 911...". The idea of reminding people not to leave a message about urgent health matter is well founded.

While I like the idea, and completely ignoring if/how StackExchange would implement it there are two issues I see. 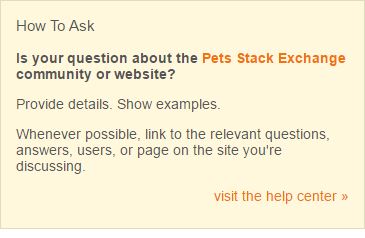 Not the answer you're looking for? Browse other questions tagged discussion feature-request .

7
Is a canonical question about free/low/deferred veterinary costs would be a good idea
3
Generate “behaving abnormally” questions?
1
Why the down votes and no comments for a well researched answer?

4
What common information should a question poster be expected to provide about their pet?
8
Who are the experts?
11
Species identification and the Help Center
3
If a question contains terms that will only be familiar to people familiar with the topic do we fix it?
7
Should medical emergencies always be off-topic?
4
What's the proper etiquette on editing people's updates to a question?
0
Could we have a close reason for “Not enough information”?
5
Exotic pet questions
2
Are questions asking for how to treat pets with vet treatments, e.g. medicines, on topic?