Saw three closures today (one was mine and I think is the most borderline, but that's what got me on this topic):

Bottom line, this practice is very harmful for a young community.

On the litter box question:

On the aquarium question:

On the pet selection question:

Best small pet for a fairly small space in a bedroom?

But the real problem with recommendation questions is that encyclopedias are a bettor format for them. We can't physically host an answer those questions with the format of this site.

Let me break it down to give you an idea of why that is:

First off, how would we list all those animals?

The answer is that we don't. People only think about a few select species.

So then why, with all these different species of animals to choose from, is it that the answers are only for a select few species?

The answer is that Everyone has a bias.

Normally the bias doesn't matter. If I ask a question about cats, I want someone who spends time with cats to answer it. But with open-ended questions like "What pet should I get" no one is going to take the time to give a comprehensive answer. Partly because no one wants to suggest an animal they know nothing about.

All it leads to a lot of noisy discussion about what animals people like best, and thats something we want to avoid.

Everyone is free to ask for suggestions in the chatroom.

How do I shop for and set up my first fish tank?

The only problem with your question was that you were trying to cram multiple different questions into one, which is against the rules. You had to have known this, otherwise you wouldn't have included your meta-comment about why your question(s) deserved to be an exception.

You broke the rules, I asked you to follow them, you refused, your question got closed. I don't see anything in that process that's broken.

Help! My cat pees on everything!

There will always be someone willing to answer a bad question. That's why it's important to close bad questions early, so that we not only avoid the noise it creates, but we can avoid the arguments of people's questions being closed when they got an answer.

The question was bad because there wasn't enough information to answer it. People don't always include everything that's needed when asking questions, and since we're dealing with live animals, there are many variables we have to deal with. It's created a couple meta discussions, the main one being: What common information should a question poster be expected to provide about their pet?

I'm going to re-use the graph I used in this answer to illustrate that we don't have to worry about gaining users. They come on their own. Which means we don't have to accept bad questions in order to gain users. 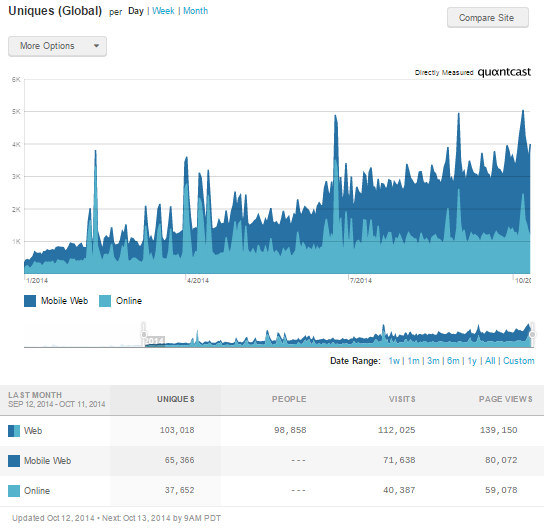 If anything, I think we need to worry less about gaining visitors, and more about gaining users, the ones who will stick around and write good answers to questions. None of which will happen if we hold to the same level of quality as Yahoo Answers. Visitors don't build sites, users do.

Bottom line is, if you think these questions are good questions for the site, I think you would be better off arguing why they're good, and why you think they're answerable, rather than saying that we should keep them because we need to attract users. Because right now, I can't say I see the value in those questions.

@MattS. posted http://data.stackexchange.com/pets/revision/241383/315568/question-votes-compared-to-its-views in chat, in response to my request to look at votes in relation to visits.

THAN: the best questions are the ones most specific to a small well defined group.

Questions with 15%+ approval rating all have 100 or less visitors

Questions with 10-15% approval rating have 220 or less visitors

The first question with more than 1000 views is How should I discipline my cat for bad behavior? with 1040 views and 34 votes for a approval rating of 3%

It is clear from this perspective that the best questions are specific and clearly defined not general or undefined questions.

All the questions that attract the most visitors are those with titles that grab peoples attention, the actual content of the question has little to do with attracting visitors. Famous Question & Notable Question

Approval rating on questions with more than 10k views are going to be skewed, but the highest voted Famous Question is Why is my dog drinking his pee after he urinates inside? with 18 votes and 17K visits, again a very specific question with narrow defined parameters.

The example Best small pet for a fairly small space in a bedroom is posted by an OP that has not returned to the site since asking it, there is insufficient information to provided a good answer for the OP, and it is not narrow or focused enough to add value to anyone else.

The example Help! My cat pees on everything! is also posted by an OP that has not returned, it got a quick answer that was very bad, and later a better answer. In hind site, we would have best served the community by putting it on hold sooner.

In conclusion just because a question can be answered, does not mean it adds value to the site or to the OP. Questions that are overly broad or with insufficient detail do not add value to the site, nor do they encourage visitors. I believe your assessment and conclusions in your question (or accusation) is incorrect.

Test Question An attempt was made with the question What small pets should I consider for a preteen with limited space? to rephrase the "best small pet" question to narrow the scope as far as possible and make it as answerable as possible; it was rejected by the community (votes from 5 non-moderators) as to broad and opinion based. Note that this question is written by an individual currently in a moderator pro tem position, who has written over 100 question on the site with a vote of 1+.

Not the answer you're looking for? Browse other questions tagged discussion closed-questions .

11
Should we allow “shopping” or product/species recommendation questions?
3
Are “Recommend a fish” questions on topic?
5
Why is it better to ask all my questions separately, and not all at once?
4
What common information should a question poster be expected to provide about their pet?
2
What kind of quality do we expect from people asking questions?
5
What's going on with our voting activity?
-3
Is the culture of Pets SE in line with the rest of Stack Exchange?
0
Could we have a close reason for “Not enough information”?

2
This question is closed for the wrong reason, should we care?
6
What is the minimal amount of research we expect from our users?
4
Should “Recommend a fish for my tank” questions be titled for differentiation, and if so, how?
2
How can we tell if compatibility questions are too broad?
0
Could we have a close reason for “Not enough information”?
0
Why was this closed as a duplicate?
0
For generic “health troubleshooting” questions, what to do with specific new observations?
3
I wanna ask this question and I am not sure, if it fits the site's guidelines